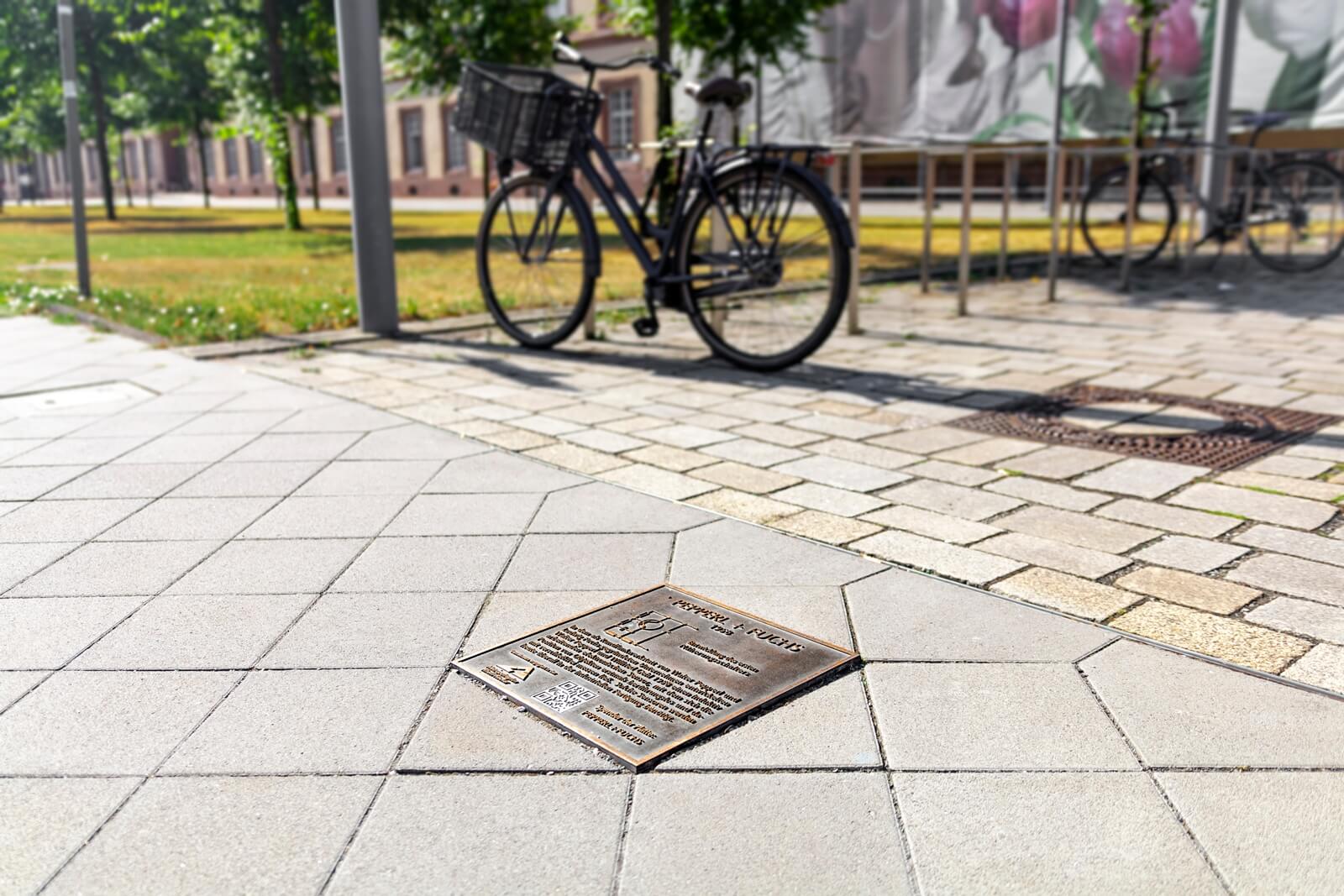 An Innovation that Changed the World of Automation

Los Angeles has the Hollywood Walk of Fame, and Mannheim has the Electoral Palatinate Mile of Innovations. Right in front of the city’s famous Baroque palace, some 42 bronze plaques now adorn the pavement of Bismarckstrasse. Since summer 2017, inventors and great minds from the Rhine-Neckar metropolitan region have been honored as part of a local initiative: Their names have been immortalized in the form of bronze plaques on the Electoral Palatinate Mile of Innovations—Mannheim's very own "Walk of Fame." The initiative aims to commemorate the region's key achievements and its economic, technical, and cultural diversity. 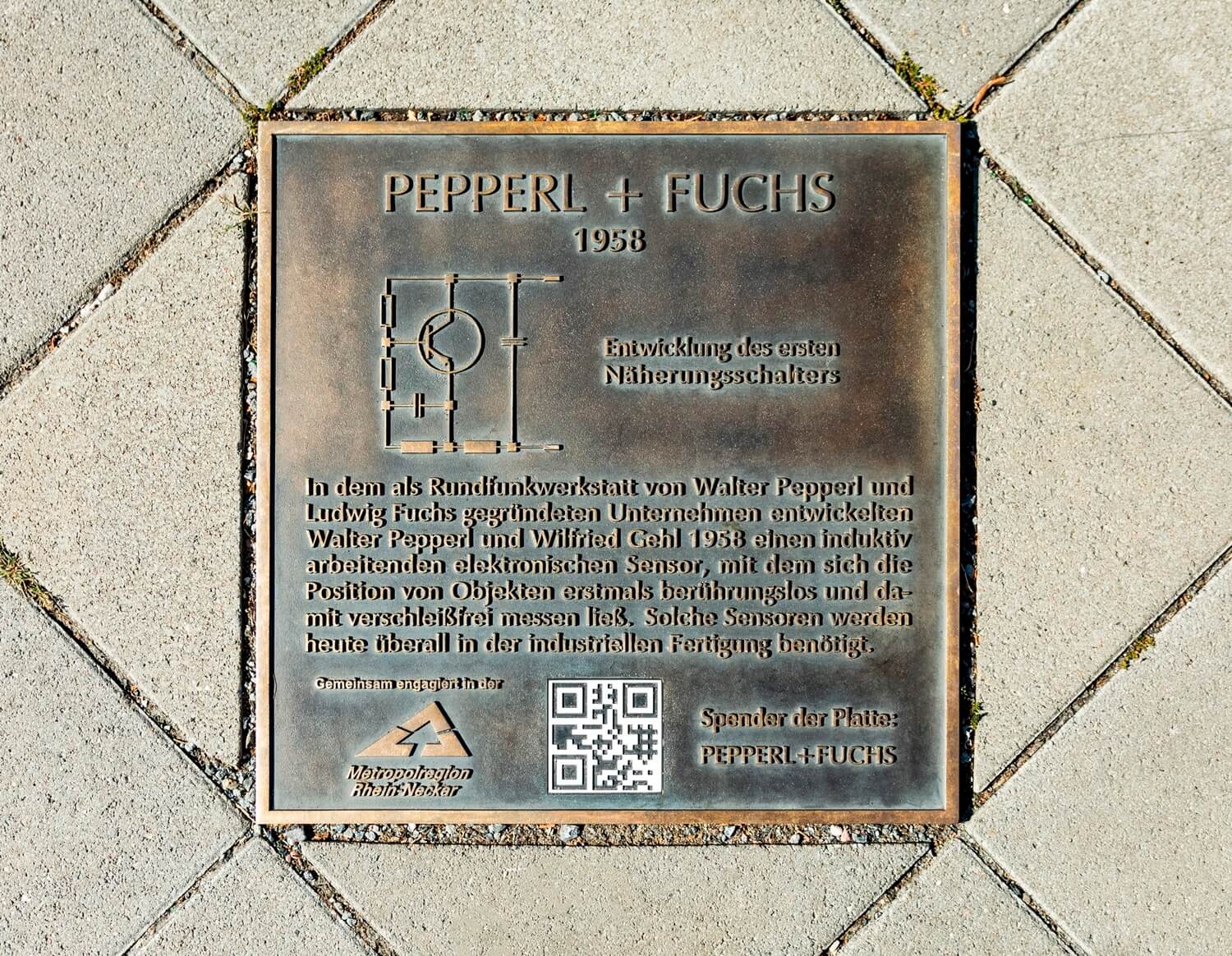 Pepperl+Fuchs' bronze plaque on the Electoral Palatinate Mile of Innovations in Mannheim, Germany

One of the bronze plaques is dedicated to Wilfried Gehl, Walter Pepperl, and Ludwig Fuchs—the inventors of the world's first inductive proximity sensor. "Our company has its roots in Mannheim, and as such we are very proud to be able to honor the inventors of the inductive proximity sensor in such a fitting way," says Dr. Gunther Kegel, CEO of Pepperl+Fuchs, at the unveiling of the plaque on July 17, 2018. "From the very early days of the company, Walter Pepperl and Ludwig Fuchs demonstrated that they had a flair for innovation and the courage to try something new—and they proved it again and again," adds Kegel. 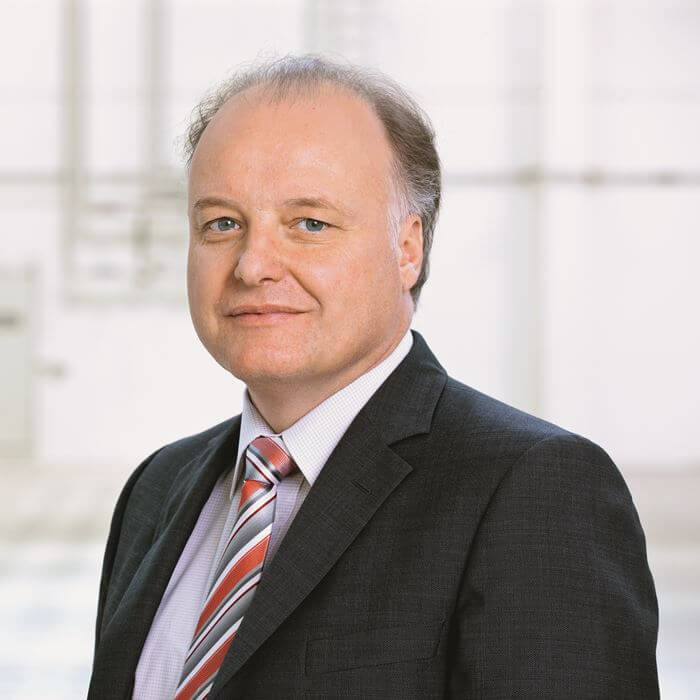 Our company has its roots in Mannheim, and as such we are very proud to be able to honor the inventors of the inductive proximity sensor in such a fitting way.

The Beginning of a Success Story

The Pepperl+Fuchs story did not start in Mannheim, but rather in Freising, Bavaria. This is where Ludwig Fuchs, who at the time was working as a bank clerk, met radio technician Walter Pepperl, through Walter's wife Anny. They quickly had the idea of going into business together. In 1945, the pair decided to move to Mannheim, the home town of Ludwig Fuchs' wife Amalie. On November 15 of that year, they set up a radio repair shop in Amalie Fuchs' family home. With business going extremely well, the pair moved to their own shop in Mannheim-Sandhofen a short time later, selling not only radios but also waffle irons and light bulbs.

Courage to Try Something New and a Flair for Innovation

The radios available in the post-war period all shared a flaw: The built-in power transformer had a paper layer that made it susceptible to moisture. Since new transformers were hard to come by, Walter Pepperl came up with the idea of using copper wire to wind the transformer himself. Using the crank mechanism from an old telephone, the revolution counter of a bicycle tachometer, plus a linkage, fixture, wire guide, and winding mandrel, he built the first winding machine for transformers—which he then sold.

As time went by, the first "true" winding machines were made available to order, and production was increased. As early as 1950, Pepperl+Fuchs constructed ballasts for the power supply networks in the Ludwigshafen region that were able to convert the 110 V supply to 220 V. Just a short time later, the company developed control transformers for industrial purposes.

The development of automatic conveyor belts around the middle of the century, along with the start of industrial mass production, led to rapid growth in the automation technology sector. At around this time, Ludwig Fuchs developed a close relationship with neighboring BASF, which at that time was experiencing problems with the mechanical contact switch that was in widespread use. BASF wanted to find a suitable alternative that would ideally be noncontact, abrasion-resistant, and corrosion-resistant. Their search led them to the two company founders, who were tasked with working out a solution that would meet these requirements. Walter Pepperl and Ludwig Fuchs began work on developing a magnetic amplifier—which at the time was still known as a transductor—and their focus shifted increasingly toward "intrinsically safe types of protection." 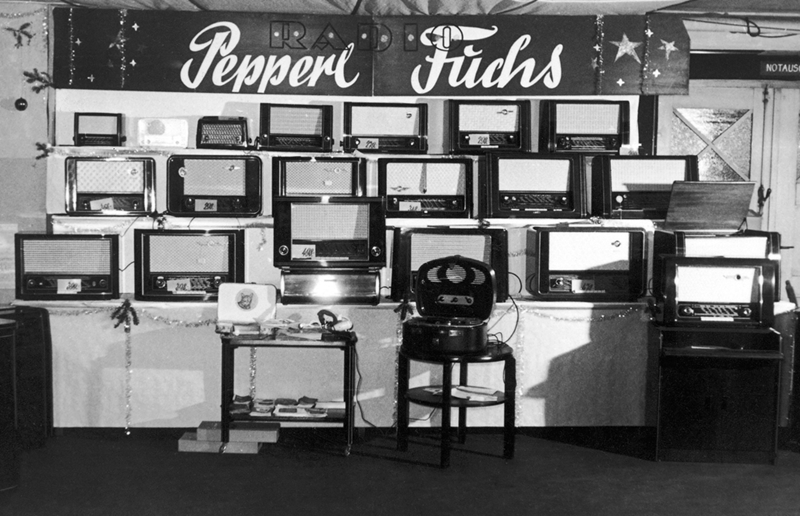 "No Such Thing as Can't"

The world's first inductive proximity sensor was created just a year later, in 1958, in response to the need for a robust component that would still function reliably after thousands of switching cycles yet had a low enough power requirement that it could be used in explosion-hazardous areas. Engineer Wilfried Gehl was pivotal to the development of this component. In 1956, the young engineer had moved to an apartment building in Mannheim-Sandhofen with his family to take up a position with BBC—now known as ABB. That apartment building was owned by Pepperl+Fuchs. The two company founders quickly spotted Wilfried Gehl's talent, and so began a successful and long-standing collaboration that would endure until Gehl retired.

Gehl began working for the company as a contractor in April 1957. He worked with Walter Pepperl on developing the first transistor switch amplifier with an intrinsically safe control circuit. The two came up with the brilliant idea of developing a switching element that would work inductively and be actuated through proximity to a metal object, and could ultimately be converted into a switching signal. They also set themselves the goal of ensuring that the power supply and switching could be achieved using just two cores.

"No such thing as can't": This was Gehl's famous mantra. True to his motto, the ambitious engineer, working together with Walter Pepperl, succeeded in evaluating the damping of an oscillating circuit using a bipolar transistor and converting it into a switching signal. The innovation was known as the KONTEX system for noncontact switching in explosion-hazardous areas and formed the starting point for the inductive proximity sensor that is today a firm fixture in industrial applications. 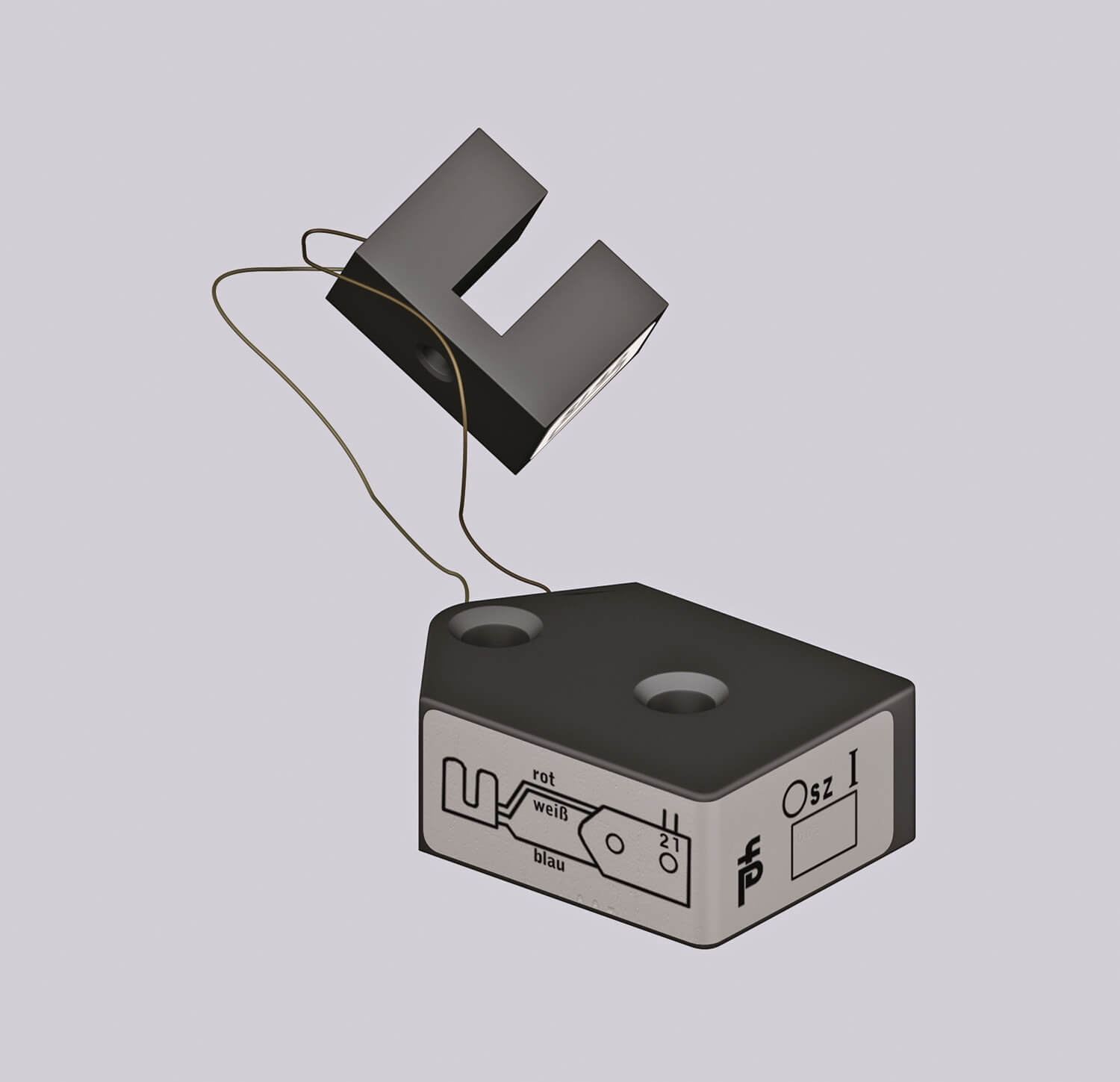 The Evolution of Machine Sensors

Following the initial success of the inductive proximity sensor in the chemical industry, from 1960 onward its almost unlimited service life saw it become a valuable component in other industries. So it no surprise that, by the end of the 1980s, almost four million proximity sensors had been sold in Germany alone.

Subsequent decades brought continuous enhancements to the proximity sensor, but the basic principle developed by Gehl and Pepperl has always remained the same. Because sensors are used anywhere in a machine where there is movement or where adverse environmental influences are present—such as particularly high or low temperatures, humidity, or mechanical loads—various proximity sensor models have been added over the years. Examples include magnetic field sensors for detecting the position of pistons in steel cylinders, and capacitive sensors that, in addition to metallic objects, can detect almost all other materials and, among other things, measure fill level or flow. The automotive industry, for example, also uses reduction factor 1 sensors. The key benefit of these sensors is that they have standardized switching distances for all metals and are suitable for a wide range of applications.

The portfolio of inductive proximity sensors now includes around 2,600 models in a wide variety of designs and sizes that are tailored to various machine installation environments. In view of the increasing use of automation and the ever-evolving challenges that go hand-in-hand with Industry 4.0 scenarios, an end is still not in sight: There will be further enhancements to the inductive proximity sensor tailored to the needs of the customers in the future.